Of all the laughable falsehoods about The Windsors, the idea that they are apolitical is the most mendacious.

Apolitical ? In a Land Owning-Fox-Hunting-Posh Worshipping-Class-Structure-Entrenching-Public School Promoting-Army-Lovin-Aristocrat-justifying-Red-white-and-blue-patriotism type way? Apolitical in the way that reinforces the idea of a class system where those at the top deserve their status because they DO RIGHT? Remind you of any political outlook?

Their very existence is a deterrent to progressive social change, they are a mascot for the 1%, always have been, always will be, no matter how many faux matey Harry’s Just One o’ The Lads type photo-bullshit they do in The Sun.

So, they’re a massive icon of traditional right wing establishment thinking, seeding the idea that Things Cannot Be Any Other Way.  That is bad enough….

But the dim Windsor family ( go on, count those A-levels… ) interfere politically behind close doors, and occasionally, in the open.

Prince Charles, of course, famously interferes, championing a whole host of -mostly moronic -causes. Even when he’s on the right track, he has no right to interfere. That’s the deal. So whilst I agree with Chazza about the environment, as a Windsor he has no right to voice an opinion. More on the Republican’s Great Hope another time.

Instead, lets look at Betty Windsor’s meddling in  last years Scottish Independence Referendum – an absolute straight down the line abuse of power. It’s an outrage, but of course, the sycophantic scribblers just cheered louder.

With the polls tight, and 4 days to go in the most exciting democratic event in UK politics, which could enable radical change….Betty went to church in Aberdeenshire. 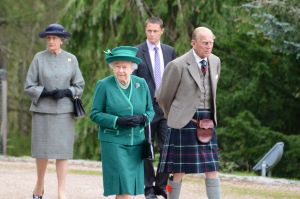 For the first time in 12 years, the press are invited – fancy that ! Betty comes out – and highly unusually –  fancy that ! she goes for a walkabout outside the church. The Police then “invited press to observe exchanges” ( this is almost completely verboten – fancy that ! ),  and queeny “warns” an onlooker – who prefers not to be named  ( fancy that ! )- that Scots should “think very carefully about the future”.

Of course, it wasn’t a spontaneous remark ( the fact that there’s wriggle room suggests it’s been written with spin doctors ) but with the BBC & tabs in full British Unionist Cry she didn’t need to spell it out.

So there you have it. Regardless what you think of the referendum, the queen deliberately and consciously interfered. She tried to sway the most important vote in UK politics for years. The establishment was threatened, and she intervened on the side of the establishment.

There as almost no criticism. No journalists was bold enough to ask her if she’d interfered.

Most of the people who voted No, were older, and richer.

David Cameron phoned her with the result, and she “purred” down the line.

They don’t interfere in politics. Except when they do.

6 thoughts on “They never interfere with democracy. Until they do.”